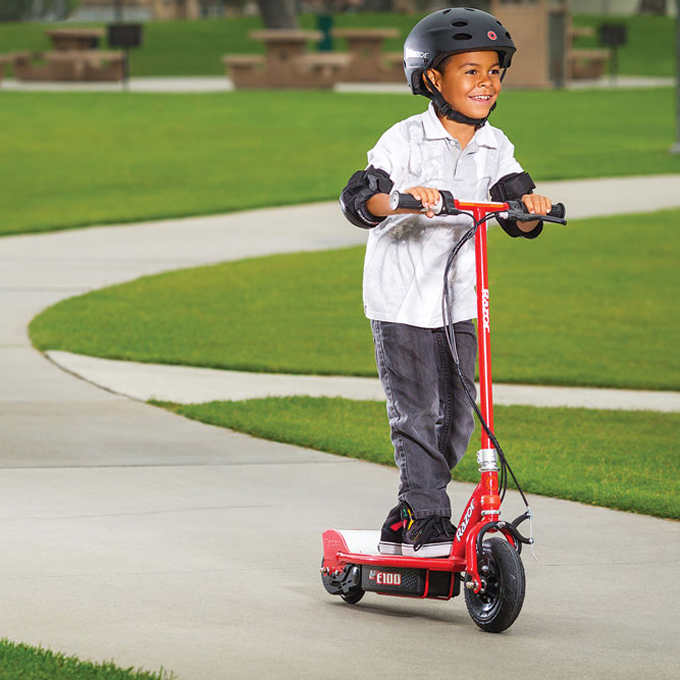 If you want to know more about the Razor E100 or any of it’s brothers (E125, E150 or E175), look no further. In the following sections we are going to review this awesome electric scooter and tell you all you need to know about and their differences. From it’s features to sound advice and real customer experiences with it, we cover it all. This will become your last stop for the Razor E100 electric scooter knowledge.

If you don’t have enough to to go through the article now and want to get some of the best prices on the Razor E100 on Amazon, click here!

This product review is focused on the Razor E100. If you are looking for a detail review of the E100 Glow instead, you can check our product review on that one.

The Razor E100 is an electric scooter, battery powered. It’s a kick start model, which means you need to give a slight impulse to it before the engines kicks in and start powering the scooter.

It’s a kid sized model, with a small frame and deck targeted for kids around 8 years old and up. This doesn’t mean that younger kids can’t use it, all to the contrary! This is a great scooter for younger kids too, as you will learn in a few sections ahead. The main thing to consider it’s the size and weight of the kid that it will use it, and the capacity to perform the basic body movements to control the scooter.

I has a nice and smooth ride, and the electrical motor is very quiet. It has a handy twist grip throttle and a hand brake.

Simple put, all these different models are just one and the same. I spend a fair deal of time researching the differences, and couldn’t find any, except maybe from their colors. And this is not always a standard thing.

If you look in the official Razor E100 Manual you won’t find any difference between them. Moreover, all the parts are the same as stated by the manual.

So after not finding anything explicit about each model in the official website nor product manual, I decided to directly go ahead and contact the customer service. I have to be honest, I thought this might be a lost cause and that I wasn’t going to get an answer in time for this writing. To my surprise, the Razor customer service replied to me in a few hours. This is the textual response I got from Razor:

The E100/E125/E150/E175 electric scooter family are all kick start models and are designed for ages 8 and up – with a kid-sized deck and frame. Traveling at speeds up to 10 miles per hour, the environmentally-friendly electric power engages a super quiet chain-driven motor. These models all run the same. The different models are based on the Retailer in which they are sold. We appreciate your interest in our products and if we can provide you any additional information, please let us know.

So there’s nothing more to add. Razor confirms officially that all these models are the same in terms of features. The only caveat that I can add is that you might find them on different color options depending on the store… but other than that, there’s no difference in how they run or in their main features.

Will my toddler be able to drive the Razor E100?

As we already mentioned at the beginning of the article, this is a kids scooter. Although it’s targeted for kids around 8 years old and above, younger kids can safely ride it. As a parent or adult in charge, you should use some common sense and be aware if your kid can handle the scooter appropriately. Meaning, pay attention to how the kid controls the weight of the scooter, and how much control it has over it at different speeds.

The maximum speed for the E100 scooter family is 10 Mph or 16 Km/h. This is a fairly low speed that can be easily controlled by young kid riders. Any adult in good shape can easily run by their side if needed, or even easily catch up with them using a bike.

There’s no age top limit to ride the E100, but you must consider that there is a maximum weight limit established at 120 lbs or 54.4 Kg. So this is what will limit which kids should use it. Although the scooter will work under heavier loads, we don’t recommend it for prolonged periods of time.

We know there are several parents that have tried their kid’s scooter themselves, putting around 150 lbs. or 68 Kg. on the scooter. The Razor E100 just continued to work almost a top speed and haven’t had any issues. This is just to let you know that this scooter is sturdy, and won’t break by having a heavy kid on it. But we recommend you play by the rules and keep an eye on the maximum weight.

If you really want an electric scooter for heavier kids, you can just go with the Razor E200 or the Razor E300, that are basically the same type of electric scooter but with some more power and higher weight limits. Which make them usable by older kids and adults.

Get an awesome price for the Razor E100 on Amazon.com

How long does the Razor E100 Battery last?

You will be able to continuously use the scooter for about 40 minutes in flat surfaces. You can definitely ride it over slight incline slopes, but keep in mind this will affect it’s speed and also the power consumption, reducing the autonomy time and requiring a charge sooner.

To keep your batteries in peak condition you must follow the rules explained in the owner’s manual. Just keep in mind:

How difficult it is to assemble the Razor E100?

Assembling the Razor E100 is easy, but it’s recommended that an adult do it. You will need approximately 10 minutes for the assembly, and the help of some tools:

If you don’t have all these exact tools, don’t despair. We’ve seen comments and customer reviews that mentioned the assembly was easy, and everything needed was provided in the box. So we assume that they mean that  the Allen wrench did the trick and you could get away with a simple open wrench too.

The battery requires an initial charge of 12 hours, so keep this in mind. Although the initial assembly will be fairly quick, you will need to wait several hours before being able to ride it. Plan ahead so your kid don’t go crazy around you for 12 hours!

What are the Razor E100 features and specs?

These are the hard specs and facts of the Razor E100 Electric Scooter Family:

What advice could current owners of the Razor E100 give to prospective buyers?

During the research phase for this article, I also invested several hours reading through a lot of Amazon customers reviews that have purchased this scooter family. I will try to summarize my research in a way that gives you a clear idea of what experiences the customers had, the good and the bad.

At the moment of this writing there were around 1,000 customer reviews in Amazon. Around 85% of them were coming from very satisfied and happy customers, giving the product 4 and 5 stars.

For this satisfied group of people, the most usual remarks were the easy assembly, the sturdiness, and in a lot of cases they mentioned that the product was still running as the first day even after 1, 2 and 3 years of daily use. Only the batteries had to be replaced several times in the course of the years, but for the majority of the customers this was good and even expected, as some of them mentioned that you can’t expect batteries to last forever.

There were also several good advices and comments that might help you and even be in sync with your case. For example:

One overly protective parent recommends the scooter. He felt secure despite his tendency to protect the child at all times and remarks it’s really easy to run on the side of the speeding scooter or catch up by bike if you are not for the exercise.

A customer remarked that her scooter batteries ran out quickly if you put it to constant and heavy use. But this is expected, and after getting replacement batteries (that are really low price), you can continue going on with the fun. Two years of constant use and the only thing to do was to change the batteries!

For another owner it was worth mentioning how easy the setup was. And after the initial charge it was ready to go. Although with a 120 lbs limit on the rider weight, it was “ride tested” by an adult of 5’9’’ and 152 lbs… good maneuverability and almost same speed but watch for the batteries if you do this regularly.

For those thinking in purchasing this as Santa’s gift for Christmas or any other surprise, take into consideration that this product is shipped in a box with a big image of the scooter in the exterior. Several customers mentioned that their kids caught the delivery truck leaving the package at their homes, resulting in a spoiled surprise. Others were lucky enough to catch it before their kids saw it.

And now let’s mention also some of the bad. Only 15% of the approximately 1,000 customer reviews were 1 – 3 star range. And even some of the 3 stars reviews weren’t bad at all!

For those people the common issues were:

The product didn’t worked at all from the start. In all cases the customer support of the store took care and sent a replacement soon enough. In one case the front tire was broken, so it had to be replaced. Also covered by the warranty. And in a few cases there were problems with the batteries, and the cable wiring.

But as I already mentioned, not all of those 15% of reviews had these problems, but only a few. It’s worth mentioning that in all cases the problem was covered by the warranty and the customers received replacements.

What is your verdict on the Razor E100?

The following is my personal opinion, and we recommend you evaluate and produce your own verdict based on all the research we presented in this review.

All in all, I would go for this scooter without a doubt. 85% of the reviews are incredibly good, coming from owners that in most cases have had the scooter for more than 2 years in daily use! The really annoyed and bad reviews are not a big deal for me, and all were fixed with the warranty and replacements after returning the original product and contacting customer support.

Go for it and become part of the happy family of Razor Scooter owners. If you purchase yours after reading this review, please let us know how everything went!

Some of the best prices for the Razor E100

Top 10 Reasons Why Electric Scooters Are The Best Urban Transport

Software Engineer, husband, father, and avid enthusiast of outdoor activities! Total fan of great quality and functional gear, spends part of his free time researching and compiling loads of information in the form of guides, product recommendations and reviews.

If you want to receive an email notification when we publish a new article, please subscribe using the form below: